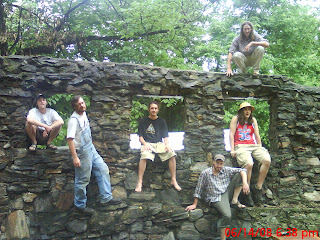 I was honored to have attended the first CD release party of "The Brothels" new cd "Its a Bird Game". The media event took place at the site of an old mill along the Broad river near Asheville, NC. They describe their music's genre as "hobo-junk-rawk" which really describes the exhilarating other worldly renditions of an original blend of many styles sewn into one driven explosion of energy. Each member plays a vast array of instruments including but not limited to acoustic guitar, electric guitar, banjo, mandolin, harmonica, trumpet and drums. The band is preparing a tour that will go throughout the south playing many popular venues.
You can listen to some of their songs at :
http://www.myspace.com/thebrothels
I wish I had a sample of their music to offer here but their CD's are now on sale from:
thebrothelsband@hotmail.com
-Earl Wallace
Posted by earl wallace at 7:57 PM

earl wallace
I am a retired IT professional and blogger.